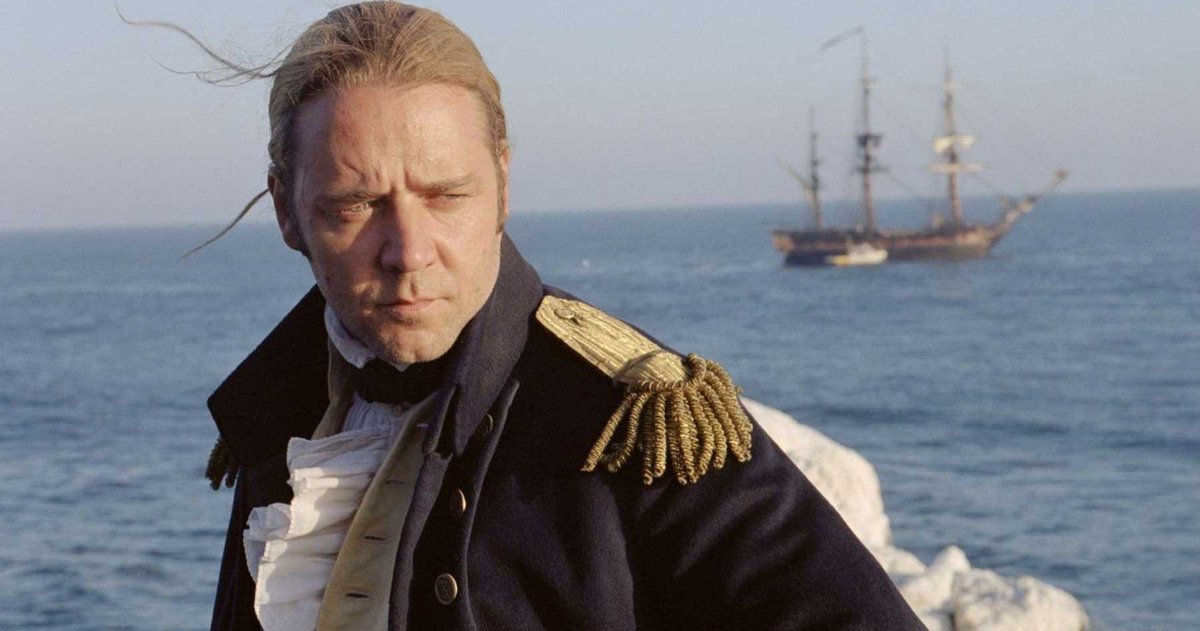 Russell Crowe has responded to online criticism of his 2003 movie Master and Commander: The Far Side Of The World. The movie opened to praise from critics and viewers, while earning 10 Academy Award nominations and earning over $212 million globally. The war-drama was directed by Peter Weir and it is set in the Napoleonic Wars. The plot and characters are adapted from three novels in author Patrick O’Brian’s Aubrey-Maturin series.

That’s the problem with kids these days.
No focus.

Peter Weirs film is brilliant. An exacting, detail oriented, epic tale of fidelity to Empire & service, regardless of the cost.
Incredible cinematography by Russell Boyd & a majestic soundtrack.
Definitely an adults movie. https://t.co/22yjNtQRbg

Obviously, art is open to interpretation and everybody is entitled to their own opinions. However, that does not mean that people have to agree on every opinion, which musician Ian McNabb learned this week when he likened Master and Commander to a sleeping aid. “Lots of folk complaining about lack of sleep during the Pandemic,” tweeted McNabb while tagging Russell Crowe. “May I recommend Master And Commander starring the usually captivating, attention-grabbing Russell Crowe. I’ve never made it past the ten minute mark. You’re welcome. And thanks Russell.”

Ian McNabb posted his criticism of Master and Commander over a week ago, though it seems Russell Crowe only learned about it this weekend. Crowe does not share McNabb’s opinion of what he thinks is one of his best movies. Crowe responded, while also lowkey dunking on McNabb. You can read what Crowe had to say about the criticism below.

“That’s the problem with kids these days. No focus. Peter Weirs film is brilliant. An exacting, detail oriented, epic tale of fidelity to Empire & service, regardless of the cost. Incredible cinematography by Russell Boyd & a majestic soundtrack. Definitely an adult’s movie.”

The floodgates on social media opened after Russell Crowe responded, and now, people are debating whether Master and Commander is truly great or not. While the movie was nominated for 10 Academy Awards, it only took home Best Cinematography and Best Sound Editing, with the rest going to The Lord of the Rings: The Return of the King. Former pro wrestler The Iron Sheik stood up for Crowe and praised his response. “You said it perfect Russell Bubba. The kids don’t know, you teach them to become legends,” said the Sheik, though he wrote it all in caps.

Others went on to praise Master and Commander, with many calling it a masterpiece. As for Ian McNabb, he responded to the “kids these days” quote, letting everybody know that he is actually four years older than Russell Crowe. Regardless, McNabb opened up a whole can of worms, which he probably did not expect. Back in 2017, Crowe revealed that Master and Commander 2 could still happen. However, we have not heard in real updates since then. Maybe this online debate will spark those talks again. In the meantime, you can check out Russell Crowe’s official Twitter response above, and then check out some support and further criticism of Master and Commander below.

Lots of folk complaining about lack of sleep during the Pandemic. May I recommend Master And Commander starring the usually captivating, attention-grabbing Russell Crowe. I’ve never made it past the ten minute mark. You’re welcome. And thanks Russell. @russellcrowepic.twitter.com/SD2runOpMA

YOU SAID IT PERFECT RUSSELL BUBBA. THE KIDS DONT KNOW YOU TEACH THEM TO BE COME LEGENDS

Master and Commander is a legit masterpiece

Coool but what do u think of John Carpenter’s The Thing?

Oh yes..hopes were high for a rip roaring tale. Unfortunately turned out as interminably dull as The Piano.

I understand MASTER AND COMMANDER as fundamentally a film about fathers and sons – and given that we live in an age when those relationships seem utterly dysfunctional, broken in ways that hurt us all, it is more timely than ever.

With all due respect, the film is like visual Ambien. It is well made, but slow. I mean turtle in molasses slow. Still, if one can keep with it, it is a work of cinema art.

Totally agree Russ. The opening sequence with the guns out of the fog is electric. The officer jumping off with the canon ball because the crew turned against him. The ‘lesser of two weevils’…all gold

Stranger Things Season 4 Is the Scariest Yet Warns an…

Full The Falcon and the Winter Soldier Trailer Arrives,…