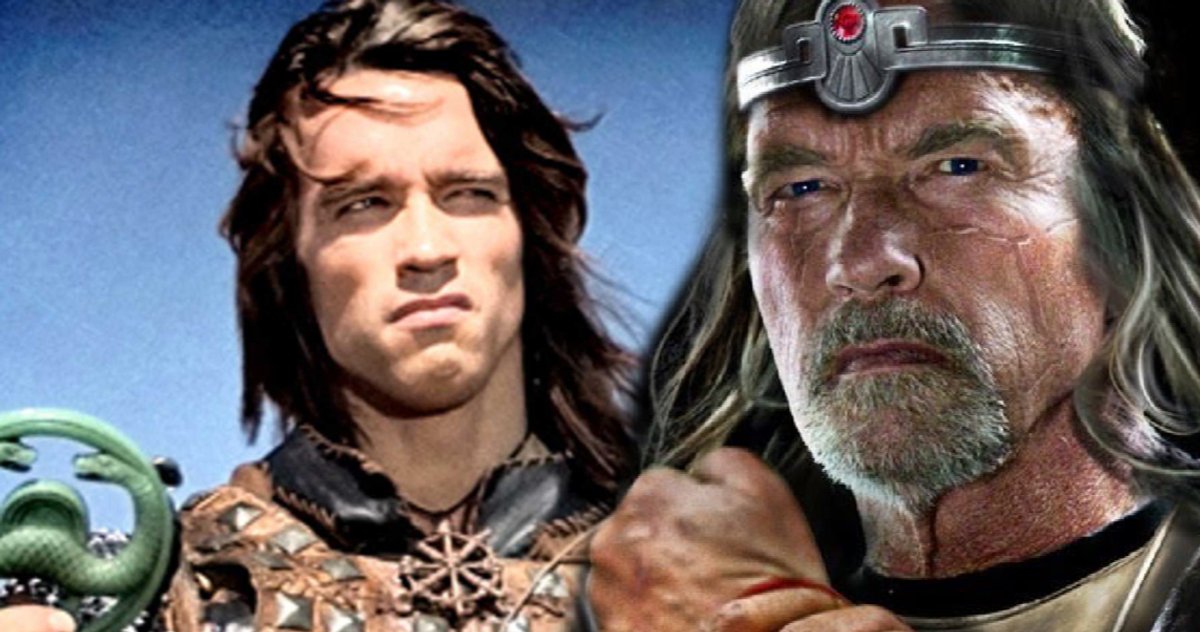 Arnold Schwarzenegger drawing his Conan the Barbarian sword in a recent video have fans clamoring for a King Conan movie now more than ever. This week, the veteran actor and former California governor took to social media to post a seven-minute video addressing the Jan. 6 attack on the U.S. Capitol. A poignant message, the video was viewed more than 36 million times with over a million likes on Twitter.

Of course, one of the biggest takeaways Arnold Schwarzenegger fans got from the video was that he referenced his classic role as Conan the Barbarian. Literally drawing out the character’s mighty sword, Schwarzenegger uses the blade to stress his point. “Here’s the thing about swords. The more you temper a sword, the stronger it becomes,” Arnold explains, suggesting that democracy had a lot in common with the steel of the Conan sword.

RELATED: Arnold Schwarzenegger Invokes Conan in a Message to the World

Conan’s weapon making a cameo in the video was quick to make longtime fans of the actor hopeful for Arnie’s return to the role in King Conan. In fact, some fans actually thought Arnold was preparing to officially announce the sequel after pulling out the sword, only to wind up a little disappointed that this wasn’t the case. Still, it doesn’t hurt the movie’s odds of finally becoming a reality with so many fans once again calling for it to happen on social media.

“Thank you Governor! Still waiting for King Conan!” tweets one big fan, including a GIF of Schwarzenegger in character.

“Bring back (King) Conan! We need that sword to be tempered once again,” stresses another tweet.

Bring back (King) Conan! We need that sword to be tempered once again.

“This reminds me, where in the hell is our King Conan movie? C’mon @Schwarzenegger let us have one more,” another fan begs.

This reminds me, where in the hell is our King Conan movie? C’mon @Schwarzenegger let us have one more. https://t.co/qPSIjyHmYK

“Well said King Conan!” another post says in direct response to Arnold’s video, this one including a piece of fan art of an older Schwarzenegger on a King Conan movie poster.

Released in 1982, Conan the Barbarian was written by Oliver Stone and John Milius with Millius directing. Schwarzenegger reprised the role in 1984 for the sequel Conan the Destroyer. As the Conan movies helped to establish Schwarzenegger as a Hollywood star, it seems perfect for him to return to the role decades later for King Conan as a way to bookend his acting career.

Fortunately, Schwarzenegger has also previously said he’s up for returning for a King Conan movie if given the opportunity. In 2019, he gave an update on the long-gestating project by revealing that he’s spoken with Milius about the director’s King Conan screenplay, which has already been written. Getting the sequel made apparently boils down to the rights-holders finally giving the project a green light to move forward.

“The only one who really has to pull the trigger there is the people who own the Conan rights to do a movie. Let’s go to Netflix or whoever it is, let’s hire a director who’s very creative and can elevate the project to make it a winning project,” Arnold explained. “I hope it will be done very soon because I think it’s a great idea.”

Maybe, just maybe, the new outpouring of fan support for the idea can finally get King Conan on the right track. The original video that prompted this whole conversation was posted by Arnold Schwarzenegger on Twitter.

When he took out the sword I just kept thinking … They really need to make that long rumored Conan sequel King Conan. But that is another story

If this is what finally gets us a John Milius-penned “King Conan” movie, then so be it!

Somebody in Hollywood needs to get a bunch a money together and make King Conan asap.

I call for those in power to greenlight a King Conan movie.

If this isn’t proof we’re ready for KING CONAN, I don’t know what is.

You’ve the best Arnold, this is an incredible statement

Ah, y por cierto: We want the King Conan movie, and we want it now. pic.twitter.com/LDkjROAb1y

Is Batman: The Animated Series Getting a Sequel on HBO Max?