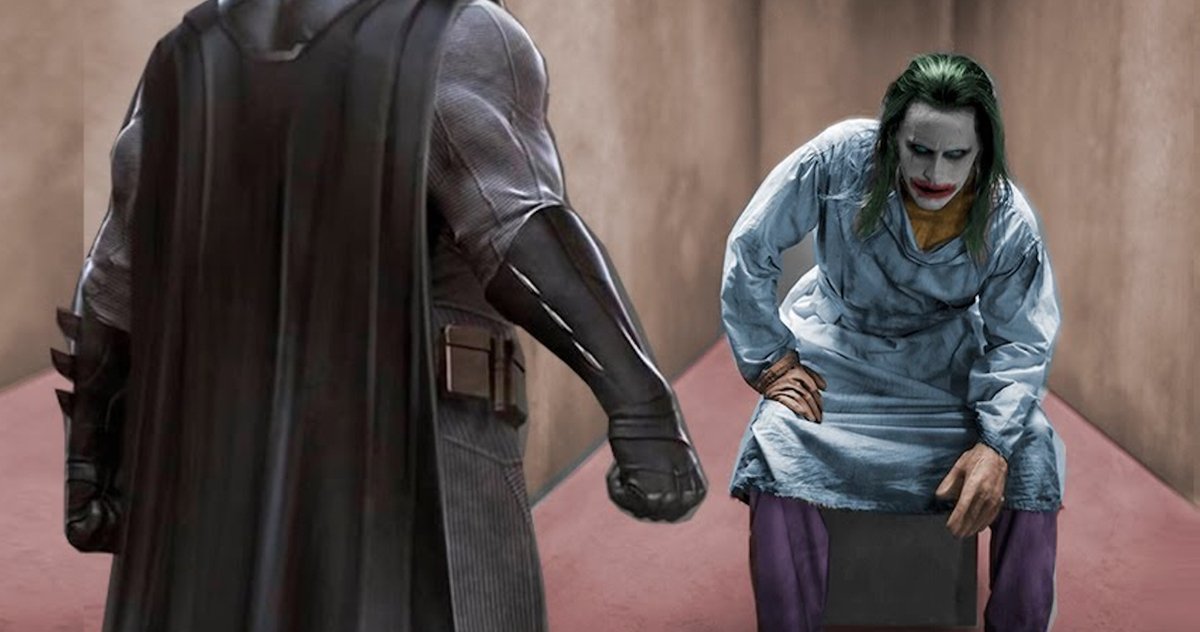 Zack Snyder has brought the infamous “We Live in a Society” Joker meme to life. The director/writer just revealed it in the latest Justice League trailer, which was released earlier today. Snyder was finally able to go back and make the movie that he originally envisioned, which included doing some brief reshoots with original cast members and a newcomer to the project. Jared Leto’s Joker wasn’t originally in the theatrical version of the movie, but Snyder brought him back as an important piece to his puzzle.

At the conclusion of the Justice League trailer, we hear the Jared Leto’s Joker declare, “we live in a society,” as he’s talking to Ben Affleck’s Batman. For a lot of viewers, the main focus was on Leto being back as the Clown Prince of Crime, which is also big news. However, for seasoned veterans of the internet, Zack Snyder just revived one of the oldest memes in history by making it official DC canon.

The We Live in a Society meme in connection with DC was used as far back as 2008, when Christopher Nolan’s The Dark Knight opened in theaters. Social media wasn’t what it is today, but some gamers began using the phrase to point out the hypocrisies in the world, while being proud of not really fitting into the world around them. The meme was mostly attached to a picture of Heath Ledger’s Joker, though he never said the line in the movie. Two years ago, the meme started to take off again when Todd Phillips and Warner Bros. started promoting the Joker movie, which also did not include the “We Live in a Society” meme.

Some fans started to believe that DC and Warner Bros. needed to reference the “We Live in a Society” meme and started a petition. As of this writing, the petition had nearly 60,000 signatures. And now, Zack Snyder has finally delivered the goods, which was not lost on fans, who have already started spreading the meme far and wide, acting as some brilliant free marketing for Zack Snyder’s Justice League, and HBO Max, which is where it will be streaming in just over a month.

Zack Snyder’s Justice League is all set to premiere on March 18th. It’s over 4 hours in length, so fans are going to have quite a bit of new footage to dissect as Snyder attempts to bring his original vision to the masses. Fans of the director seemingly never gave up hope that this day would come, and they, after 4 years, are finally being vindicated and rewarded for their patience. Even people who didn’t really care about the new version of the movie are excited because Snyder brought the “We Live in a Society” meme to life. You can check out the latest trailer from Zack Snyder’s Justice League above, thanks to the official HBO Max YouTube channel.

#SnyderCut and “We live in a society” are trending on Valentine’s Day. pic.twitter.com/kasN3Uz51M

The snydercut trailer really had Joker saying We Live in a Society 😭 pic.twitter.com/H5qSc2FeSY

ARE YOU KIDDING ME THEY ACTUALLY MADE THE JOKER SAY ‘WE LIVE IN A SOCIETY’ https://t.co/8fTi73vCcf

Joker: “We live in a Society”

Batfleck: “Shut your b*tch a** up”#ZackSnydersJusticeLeague#SnyderCutpic.twitter.com/m1fNtQI4zV

The Joker and Batman.

DID SNYDER NOT GET THE MEMO THAT “WE LIVE IN A SOCIETY” WAS AN IRONIC MEME? https://t.co/6lME0HfaOjpic.twitter.com/asdj8VU9CJ

Me when Joker said “We live in a society” #SnyderCutpic.twitter.com/GtsWcc3MeM

I was about to ask how long until “We live in a society” starts trending but pic.twitter.com/0yZw9sB5PI

Pedro Pascal Is Joel in The Last of Us TV Series

Godzilla Vs. Kong Trailer Is Ready to Stomp on Marvel…