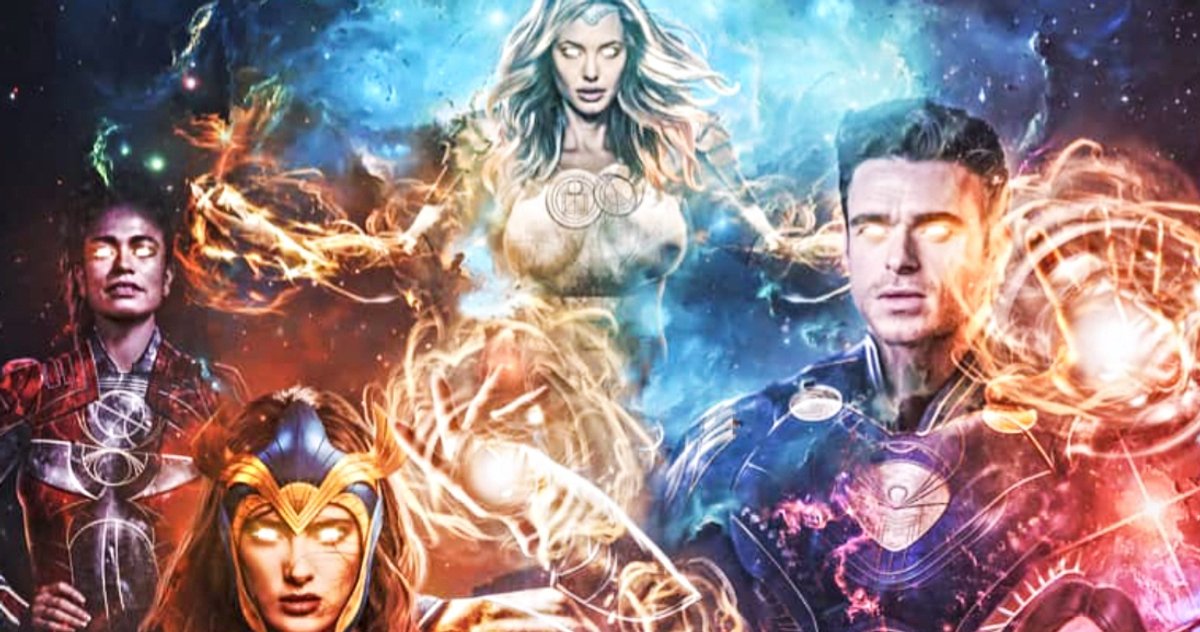 A new promo image for Marvel’s Eternals movie has leaked. It shows off the full team in their suits, providing one of the best looks at the upcoming highly anticipated movie thus far. The Marvel Cinematic Universe Phase 4 just kicked off on the small screen with WandaVision, though it was supposed to have already started on the big screen last year with Black Widow and Eternals. However, the public health crisis prevented that from happening. Eternals will now open in theaters later this year.

From left to right, the leaked Eternals image features, Makkari (Lauren Ridloff), Kingo (Kumail Nanjiani), Thena (Angelina Jolie), Gilgamesh (Don Lee), Ikaris (Richard Madden), Sersi (Gemma Chan), Phastos (Brian Tyree Henry), Ajak (Salma Hayek), Druig (Barry Keoghan), and Sprite (Lia McHugh). The artwork is from a t-shirt tag, which will be on sale soon. It’s pretty surprising that we have not seen more leaks from the movie since it was already supposed to have been out in theaters late last year.

The last time we saw the Eternals cast lined up in a similar manner was at the D23 Expo in 2019 when the concept art and cast was revealed. As for how these new characters will interact with the previous MCU characters, that is unclear. It appears that the comics are trying to retcon part of their history as it pertains to being gods and goddesses. Part of their identity in the comics is influencing mythology on Earth, which the comics are apparently doing away with, noting that real gods do exist within their universe. The comics go on to reveal that some of the characters are “annoyed” that humans keep mistaking the Eternals for gods.

It’s also unclear if this new development in the comics will play a part in the Eternals adventure on the big screen. At this point in time, it seems like it has to, especially since the movie was already supposed to have been in theaters. With that being said, Marvel Studios boss Kevin Feige has everything under wraps, which is something that he and his crew excel at for all of their projects. WandaVision debuted with two episodes and MCU fans still really have no idea what is happening in them, thanks to the secrecy that the studio is known for.

One character who is mysteriously absent from the Eternals promotional material is Kit Harrington’s Dane Whitman. Though he is not technically an Eternal, fans have expected to see more of him. For now, we’ll just have to wait and see if he will be featured in the trailer when it is finally revealed to the public. As for when that will be, we don’t really have a timeline, though it could be a while since the movie doesn’t open in theaters until November. In the meantime, you can check out the latest look at the cast above, thanks to the Eternals News Twitter account.

No Time to Die May Skip Easter for New Thanksgiving Friendly…