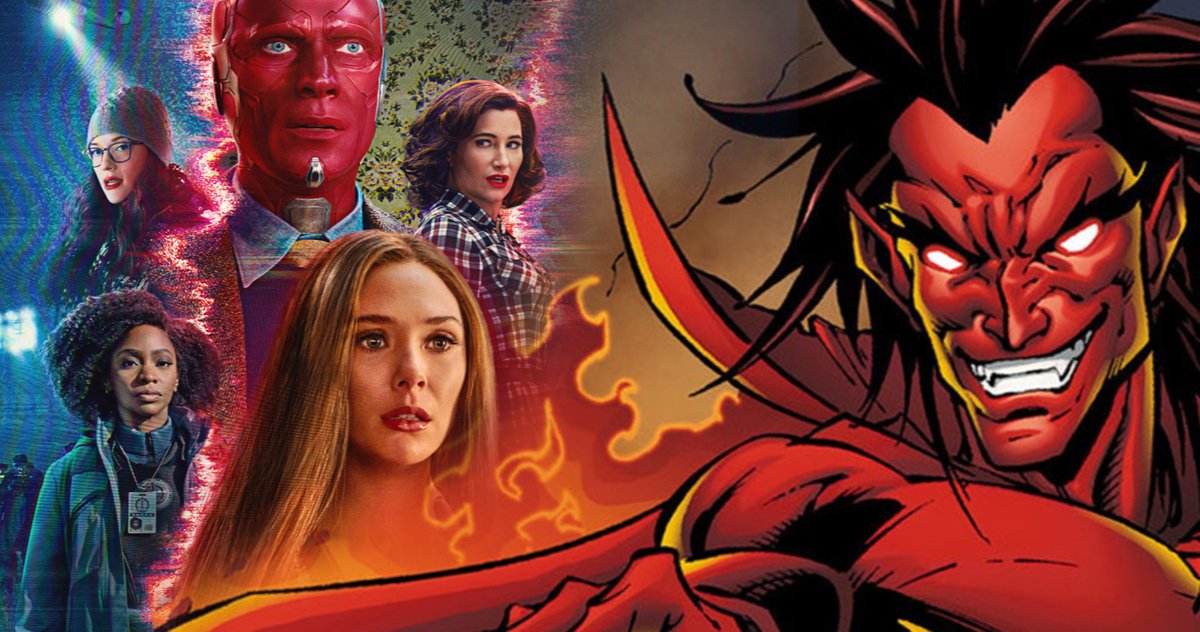 The WandaVision midseason trailer was released earlier today, along with a brand-new poster featuring the show’s main players. The trailer features some new footage, but it appears that some Marvel Cinematic Universe fans are concentrating more on the poster, which may very well tease the villainous Mephisto. For weeks, fans have been trying to figure out the mystery behind who could be the villain of the Disney+ series, with more than a few believing Elizabeth Olsen’s Wanda Maximoff could be the true villain. But is that really the case?

Since the new #WandaVision poster has the Beekeeper in it, I wonder if he will play a bigger role than what we think 🤔

Also, people have noticed that possible Mephisto tease in between #Vision and #AgnesTheNeighborpic.twitter.com/3kPyFzna4Y

Upon closer inspection of the new WandaVision poster, there is something else besides Wanda Maximoff, Vision, Monica Rambeau, Agnes, Darcy Lewis, and Jimmy Woo. In between Vision and Agnes, the wallpaper is noticeably visible and it appears that Mephisto’s face could be in it. It obviously has not been confirmed, but the wallpaper has been shown before and this particular pattern was not present before. Obviously, this could be a case of pareidolia in the wallpaper design, but it is suspect, nonetheless.

The wallpaper could be an artist having some fun with Marvel Cinematic Universe fans, or it could really be nothing. However, it has been rumored more than once that Mephisto could be the true villain of WandaVision. As is the case with most mysteries, the most obvious villains usually aren’t the true villains, which would, at the very least, count Wanda out. During episode 4 when Darcy Lewis is reviewing the footage of Wanda’s reality, it is clearly being manipulated and censored, leaving one to wonder who could be behind it all.

Another peculiar aspect of WandaVision episode 4 was the mention of CBMR, aka Cosmic Microwave Background Radiation. This particular radiation was present during the Big Bang, which created the universe, so how would Wanda have access to it when creating her reality? This is where Mephisto could possibly come in. Did he make a deal with Wanda to bring Vision back to life? The villain is able to grant wishes, for a cost, in the comics, but it’s usually a soul. It’s entirely possible that Mephisto is behind all of this, but is the MCU really getting ready to introduce the Devil on Disney+?

Adding to the Mephisto speculation is all of the six sided shapes, aka hexagons, which even has Jimmy Woo baffled. Marvel Studios has created a modern mystery series within the MCU, which has everybody trying to guess what exactly is going on. It’s going to be interesting to see what happens when this all wraps up. Marvel Studios boss Kevin Feige has already said that WandaVision leads right into Doctor Strange in the Multiverse of Madness, so the stakes are high, though it’s still unclear just how high at the moment. You can check out the WandaVision poster above, thanks to the Arrowverse Scene Twitter account. Is Mephisto hiding in it?

Godzilla Vs. Kong Trailer Is Ready to Stomp on Marvel YouTube Record

Ebola Rex Vs. Murder Hornets Trailer Is Here, Forget All About Godzilla Vs. Kong

WandaVision: Kat Dennings on How Darcy Lewis Is a Boss Now

Legend of Zelda TV Show Was Canceled by Nintendo Because…

Armie Hammer Apologizes for Leaked Video from His Private…

Scream 5 Is One Year Away, Ghostface Will Kill Again